Secrets of the Senses by Donna M. Jackson 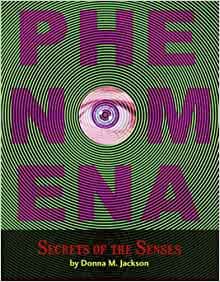 There are many things that go ‘bump’ in the night that amaze and astound us.

“Phenomena. Secrets of the Senses” offers us a treasure trove of paranormal and amazing normal phenomena that our more than five senses experience. Written for the layperson, notably school-age children, Jackson’s easy to read book offers scientific information on a variety of phenomena, some of which can be easily explained through scientific study, while others defy explanation.

The author catches our interest immediately with the true life event of Ian Waterman whose mind and body became disconnected. His body was not receiving sensory feedback which allowed him to monitor his actions due to a rare disease. As a result he suddenly was unable to feel anything he touched and did not know where the various parts of his body were until he looked at them. Through determination and over years Waterman was able to train himself to walk, sit up, stand, and drive by looking at his limbs and concentrating on making his body move (p.2). Such is the phenomenal interplay of the mind and body that is explored throughout this book.

Most of us think of only five senses that impact on us, sometimes six. But as we soon learn in this book, that while vision, hearing, touch, taste and smell are the most obvious primary senses, at least 21 have been identified (p.2). Additional senses include hunger, thirst, internal monitoring of heartbeat, and levels of oxygen and carbon dioxide, among others that keep our body functioning smoothly (p.3). The author moves into scientific explanations for a variety of aspects regarding our body and brain without becoming overly technical nor abstract. Her explanations of neuroscience are easy to understand without becoming simplistic. There are intriguing photos and “Mind Tinglers” inserts that grab the reader’s attention.

Interviews with various medical scientists are included to help add to the explanations or refutations of various phenomena presented. Various sensory-based afflictions are listed where the senses go awry. Capras syndrome is one in which people lose the emotional connection to the visual awareness of friends and close relatives. As a result they think that others are ‘imposters’ because they do not feel the appropriate emotions upon seeing them; however they do have emotional connection when hearing the same person’s voice on the phone (p.9). There are other chapters included which address topics such as animals sensing of earthquakes and natural disasters, as well as even being able to sniff out cancer in humans; phantom limb sensations and ways to counter-act them; use of the tongue as a way to see and restore balance; and computer programming that allows the blind to use sound to see.

Where the book is of interest to parapsychologists is when it transitions smoothly into introducing paranormal experiences, our sixth sense, as phenomena that may ‘have roots in our sensations and the way the brain understands them through our perceptions” (p. 9). Trying to be objective, Jackson presents both sides to seemingly paranormal events. However, at times she appears to give more weight to the skeptical side. For example, she reports on Annette Martin’s psychic medium experiences which she uses in helping police in the state of Washington solve murders. But she also includes skeptic psychologist Thomas Gilovich who offers a counter argument that such events are deceptive sometimes. But he does admit “the truth is, it would be amazing if we had those powers. However wonderful this world is, it’d be even more wonderful if that stuff were true” (p. 19).

Mediumship and prophetic visions are also included. Jackson discusses Nostradamus’ predictions; and the skeptics’ view that any links made to his obscure visions lie in the readers’ making connections after the fact (p. 20-21). The Spirit photography of William Mumler is debunked as doubly exposed film that made superimposed ghostly figures appear onto the original photos. David Myers’ comments help balance this negative view of paranormal phenomena by stating how parapsychologists use scientific inquiry to help “separate bizarre ideas from those that sound bizarre but are true” (p. 22).

The Ganzfeld studies at the Rhine Research Center are cited. John Palmer explains the process in detail and how chance expectancy is only 25%, while the studies have resulted in an average of 33%, “which is quite significant statistically” (p. 22). However, the author lends more weight and support against this study and psychic phenomena through remarks by Richard Wiseman, psychology professor at the University of Hertfordshire. Originally a professional magician, he now turns his studies to deception, psychic fraud and the paranormal. He feels that people get hurt “emotionally, physically and/or financially” from such fraud. Three of his studies are included which are presented as refuting the support for or existence of ESP. One involves an explanation for why people may feel a house is haunted. Using contemporary music mixed with infrasound (sound pitched too low for humans to hear), he had an audience of 750 people describe their reactions. Twenty-two percent gave responses in keeping with strange experiences, intense sorrow and spine-tingling chills. Wiseman suggests his study shows that the low level infrasound may be present at ‘hauntings’ thereby creating the sensations people attribute to ghosts. Unfortunately Jackson does not cite William Roll’s impressive and extensive research on Recurrent Spontaneous Psychokinesis (RSPK) that offers support of psychic abilities in another direction.

Another study by Wiseman using a “Mind Machine” that allows the participant to predict the outcome of a random coin toss in believers and non-believers of ESP did not result in any supportive evidence of ESP in almost a quarter of a million trials collected (p. 24- 25). However on the side of good paranormal research are years of research using random number generators resulting in positive PK results. The research of Robert Jahn,

Roger Nelson, and Brenda Dunne in the PEAR experiments on psychokinesis consisted of 33 subjects who tried to use their minds to affect machines. There were over 14 million trials over a seven-year period with statistically significant results over chance findings.

Wiseman’s final experiment included students and psychics who ‘read’ three items that were each associated with three solved crimes. Results showed that the psychics were not more accurate than the students and both groups did not perform above chance. Again, Jackson overlooks credible research with psychics conducted by the University of Virginia and at the Rhine Center that counters this research.

Another chapter is devoted to Intuition. Unusual coincidences are looked at through a scientific lens with logical explanations. And yet Jackson includes two examples that offer the possibility of divine or angelic intervention (p. 61) without skeptical counter-arguments. One is the story of Hollis Long’s precognitive dream about being reunited with his former girlfriend (which eventually led to marriage and became an integral and profound part of his life’s story) is looked at as a possible nudge from a higher power (p. 61). Squire Rushnell is included in the book to help offer an explanation that they are a “God Wink” which he views as a “personal signal or message, directly from a higher power” that serves the purpose of reassuring the receiver that they are “moving on the right direction along life’s path” (p. 61). It seems hard to imagine why the author chooses to give Rushnell’s work a higher level of credence and acceptability by leaving it printed unchallenged and unscathed by skeptic’s comments, as compared to the strong opposing comments that are included against each presented piece of parapsychology research.

The chapter on “Dream Worlds” briefly addresses precognitive dreams but spends most of the chapter on the historic and beneficial aspects of dreams and the study of dreaming, including a few comments by Robert Van de Castle. The chapter’s opening story catches the reader’s interest with a powerful life experience that could have been fatal if not for the repetitive precognitive dreams of her savior. Rita Dwyer, a research chemist, was working in a lab developing rocket fuel in 1959 when one of the propellants exploded setting her and the lab on fire. She could not put the flames out on herself and fully expected to die. While screaming she heard someone call her name before passing out. She found out weeks later that her good friend and a fellow chemist, Ed Butler was able to save her based on a recurring dream he had for several weeks prior to the accident. He kept dreaming of being in his office lab, in shirt sleeves, without protection on, when he would hear an explosion. He would go to the doors between his lab and Rita’s and hear her screaming. In his dream he would call her name and go in and get her. He would grab her by the foot that was not burning and pull her to safety. He would get her to the safety shower and put out the flames and then reach for the red phone (a hotline) for help. But then at this point he would wake up each time. However, this time during the real event, he automatically followed the actions of his dream, rescuing Rita. When he picked up the red phone there was a coworker on the line who could help, and it was then that he realized that his nightmare was now actually a reality. While neither scientist was superstitious or believed in dreams, Rita admitted that “all dreams bring information…when a dream repeats itself, it wants us to pay attention” (p. 69). Unfortunately Jackson does not include the rich and statistically significant precognitive dream experiments of Stanley Krippner and Charles Honorton to help offer support to the existence of such phenomena. This writer would have liked, in general, the inclusion of more supporting scientific research on some of the paranormal phenomena included in the book. It felt as though the chapters were often weighted more heavily in favor of the refuting skeptical researchers whose studies are offered as irrefutable evidence, even though they appeared less than impressive.

All in all “Phenomena” is an enjoyable book for children and adults. At the least, it succeeds in introducing readers to the existence of psychic phenomena and parapsychological research being conducted.